Wanderers football moves to Ireland, to Cork exactly, where we will discuss with Niamh O’Mahony, member of Foras (Cooperative of supporters that leads Cork City FC) and representative of Cork City FC in the Fútbol Popular Meeting in Murcia.

We should remember that Cork City FC was refunded after bankrupt by a cooperative of supporters and nowadays it is one of the most democratic clubs worldwide. After playing in the second division and getting into a foundation, this season Cork City FC has started competing in Europe, has won successively two subchampionships of the League and some days ago they have participated in the final of the FAI Cup, the Ireland Cup, in the Aviva Stadium where we were lucky to share with them a great day. However, we could not celebrate de victory of the Rebel Army in Dublin.

Firstly, how was the foundation of FORAS and the bankruptcy of Cork City?

The idea of the supporters trust came about at a time when a local businessman by the name of Brian Lennox owned and was chairman of the club. Brian was well-respected, and ran a well-known family chip shop as well as the football club. The fans used to sing: ‘Who needs Abramovich, Brian sells lots of chips.’ The club was run well, it paid its bills and in 2005, we won the League title with an excellent squad of players.

Supporters had few concerns with Brian in charge. We trusted his judgement. Our discussions about the future focused on how the club could survive after Brian – as no chairman can last forever. Friends of the Rebel Army Society Ltd (FORAS) was formed in 2008 with the aim of ensuring that there would always be a League of Ireland club in Cork, and that the trust would support the club in every way it could. Our initial idea was to fundraise and build a training facility, which we could then lease to the football club. We hoped that in years to come that we might gain some shareholding – but that was far into the future at the time.

By the summer of 2008, however, the club was also in serious financial trouble. Brian Lennox had sold the football club to an investment fund called Arkaga, and it had appointed someone to run the football club that knew nothing about running a football club.The club’s wage bill was enormous and the club had debts of €1.3 million (which is huge money with our average crowds of 3,500) when it was suddenly put into examinership (like administration in the UK) in August 2008. 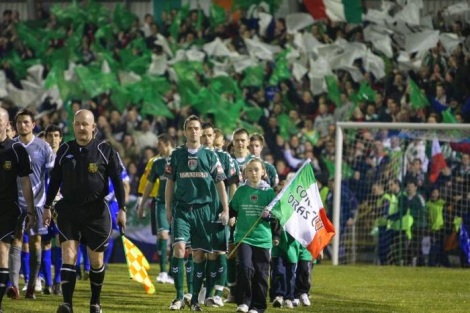 An interim examiner was appointed with the task of putting a rescue plan in place. Players were sold to English clubs, staff were made redundant and costs were slashed. The same week the club went into examinership, FORAS had its official launch and was immediately seen as the ‘voice’ of supporters.

FORAS worked with the examiner to maximise income. It put a financial fund in place for the staff and players who needed additional support (as they were only getting a portion of their wages), and by acting professionally and helping in any way we could, the trust gained a lot of credibility in those early days.

At the end of the examinership period, the examiner announced that his preferred buyer for the club was a man by the name of Tom Coughlan.Despite not being paid their full wages at the time, the players managed to get the final and win the Setanta Sports Cup.Tom initially tried to work with FORAS and also publicly promised to give the club to supporters in the longer term.

However, the relationship became difficult. He changed the manager at the end of the 2008 season. The club was still spending a lot money on salaries without increasing its income, and FORAS eventually withdrew its support.

In late 2009, Tom Coughlan was banned from all football-related activities for 12 months because the club has been back in the High Court and not paying its bills once again. During the 2009 season, only a friendly against Celtic had saved the club from going out of business. The trust, along with two local businessmen, tried to buy the club from Tom but we found new debts of over €1 million.

In February 2010, the trust gained a licence to participate in the First Division from the FAI. The company that ran Cork City FC was refused a licence. That ended our interest in trying to buy the club as CCIFL Ltd, the holding company, was wound up in the High Court the very next day.

FORAS had only 11 days to prepare for the new season, and it is important to say that if Cork City FC had gained a licence, we would never have entered a team in the League against them. Our licence application was only made a fall back measure to ensure there would be League of Ireland football in Cork. We entered the First Division as Cork City FORAS Co-op (Cork City FC!) for that one season. The trust bought the liquidated assets of Tom’s holding company, including the club name and crest, and competed once again as Cork City FC in 2011.

What were the most difficult moment between 2008 and 2010? Did the Irish Federation generate a lot of problems?

I think this has been covered in my answer for the previous question. If there was one particular moment that stands in my mind – the trust had a meeting before it took over ownership. We were trying to decide whether to be part of the consortium (with the two businessmen) to try and buy the club. And we were willing to do that – pay over all the money the trust had to take on a club loaded with debt. We were fortunate that it worked out that the deal fell apart. We simply did not think we could run the club by ourselves until there was no other choice. Look at us now!

How is Cork City FC currently managed and which power of decision have the supporters in the club?

Club operations day to day are run by the CEO and Club Administrator. They report to the Board of Management, however, which meets once a fortnight. The Board is made up of seven members of FORAS. One third of the board needs to step down each year, and members sit for up to three years at a time. The chairman of the trust is also the chairman of the club. The board has an input into all aspects of club activities apart from the playing squad. There, the board sets the total wage budget and after that the manager can do as he likes. The trust meets at least twice a year (at an AGM and GM) where the Board will give full and sometimes confidential updates to members. We also sent out email updates and have a page in the club programme. We have to work within Irish law too. For example, if a member wants to know how much the CEO earns, the CEO is also entitled to privacy under Irish law so we will share a figure for all wages at the club rather than individual wages.

After five years of a lot of work, you have enjoyed in Europe this year again, playing the qualifying round against Reykiavik. Do you consider that the project of consolidation of Cork City has been successful? Which are your goals?

It was a really proud moment for us to return to European football this summer. As a supporter I remember the big European matches of old and how much pride you can in your city and your team for playing on that stage. Preparing to host a game in European competition involved a huge amount of planning and effort, and there was a great feeling of satisfaction afterwards. Our goal is to qualify for Europe every season if we can. Now that we’re back at the top level, we have to find new goals and these include a permanent training facility for the club (which hopeful will come about through the FAI’s planned Centre of Excellent in Cork), and also to further develop our underage structures. As supporters, we are the most ambitious owners the club will ever see – we want the best stadium, the best training facilities, the best players, the best young players, the biggest crowds, the best merchandise, the best media coverage etc. as well as success on and off the field. 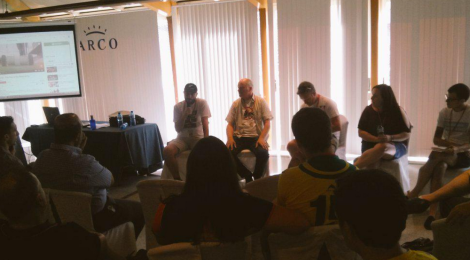 You participate in the Poplar Football Meeting in Murcia, What do you think of these type of meetings for creating a community of teams and supporters at European level?

I think meetings such as the one in Murcia are very important to clubs who are finding their way in the world. When Cork City FC first came under fan ownership, I attended a meeting in London where people from other supporters-owned clubs gave us great advice on what to do next. At these meetings, you meet people that face the same challenges you do, that have been through the same things and know how to succeed. You might find that you are doing a lot right but can improve further. Each club will have different needs but in talking to other clubs can still learn, grow and co-operate. Talking to each other is the simplest way to develop new ideas across Europe, and is now a very important part of what Cork City FC does.

Which was the most important part of the meeting for you?

For me, it was really interesting to hear about what each individual club was doing. The newest clubs got to present their ideas to the meeting and its very invigorating and energising to hear about the motivations and ideas behind these ‘new’ clubs. It reminds you why you too started out on the journey and makes sure that you never leave your ideals and ethos too far behind. We all need to remember our roots and the reasons we first started our trust or club. We cannot stray too far away from that no matter how successful we are.

Which team or association was the one that most impressed you in Murcia?

I heard a great amount about CAP Ciudad de Murcia while I was in Spain for the couple of days. We saw where the club used to play for instance as well as their club house. They have overcome many different challenges and are to be admired for that. However, each club we heard from were all doing great work – from community work, to not accepting corruption and greed to great promotional work. All of the clubs deserve a huge amount of credit for what they have done so far as sometimes it’s hard to look back and give yourself some credit.

At the last one, what is your opinion about Wanderers, the football of the people?

Football for me is about people. The players, the supporters, the people involved. No one ever dreamed of having a battle of the richest owners. That is not football. Football is a community, it’s about being involved in your local community. If you think about your favourite moments in football, they are special because of the people – your favourite player that scored a goal and ran to you, the league win you celebrated with your brother alongside, the tear you wiped from your eye when you saw your captain cry. That is football. It’s emotion. It’s connection. It’s loyalty.

So, for me, any publication that highlights all the wonderful things football can be, the good stories, the clubs making changes, the supporters creating something new – I think it can only be a positive to have around!